Working as a flight attendant has given me the craziest, hilarious and most wonderful memories. I’m constantly living an adventure and decided that each month I’ll post my most memorable moments. Here’s what happened to me in January… Enjoy!

1. I had my first medical emergency!

After several delays and battling a snow storm, my flight finally took up from Halifax to Ottawa. There was some sickening turbulence and a woman complained of feeling sick. About 2 minutes after I gave her a sick bag and told her she would be alright, I looked back to see her seizing in the aisle. I had my galley cart with me and her body was blocking the way so I had to climb over my cart to reach her. By the time I did she was unconscious and unresponsive, and appeared to not be breathing. The other FA was in touch with the flight deck and made an announcement looking for any medical professionals. I lowered her to the floor and re-assessed and thankfully this woman did have a weak pulse. I wont go into details about what happened, as that seems unethical. But we diverted the flight to Montreal and might have broken records for securing the cabin as quickly as we did. The guests on board were phenomenal and if it weren’t for them I wouldn’t have been able to continue on with my night. We had previously flown Toront-Ottawa-Halifax and left Halifax at 8 pm. We didn’t land in Ottawa until 2 am and because of the amazing people on board, my crew and I decided we would keep going to Toronto. We got to Toronto at 4 am and it was by far the most exhilarating, emotional, and incredible day I have ever had. I have never felt so connected to a group of people before. Those 78 guests and our crew were in it together, and you could really feel that. Many of our guests were travelling with us all the way to Toronto from Halifax, and they were so wonderful through it all. They even gave us an applaud on our flight to Toronto, and just today I received an email from a guest through westjet thanking us for our positive attitudes during the flights. My crew was wonderful – they kept going determined to get our guests to their destination safely, and continued with their usual energetic and amazing spirits. It was a flight I will never forget.

2. I got to fly in the jump seat of the flight deck

One perk of being a crew member, is that if the plane is full there is still one more seat you can hop into. Heading to work in Toronto a few weeks ago my flight was cancelled and therefore the next flight became full. Flying standby can be a little unnerving but luckily I was able to sit in the Flight Deck and make it to work.

3. We only had 5 guests on a two hour flight

This is also one of those flights and crews I wont forget. We were flying from Halifax-Ottawa and only had a total of FIVE people on board. The other flight attendant and I wanted to make it special for them so we learnt all their name and personalized all our announcements for them. They all decided to sit together during the flight, and we kept the wine, food and conversation flowing the entire flight (well no wine for us:( haha). 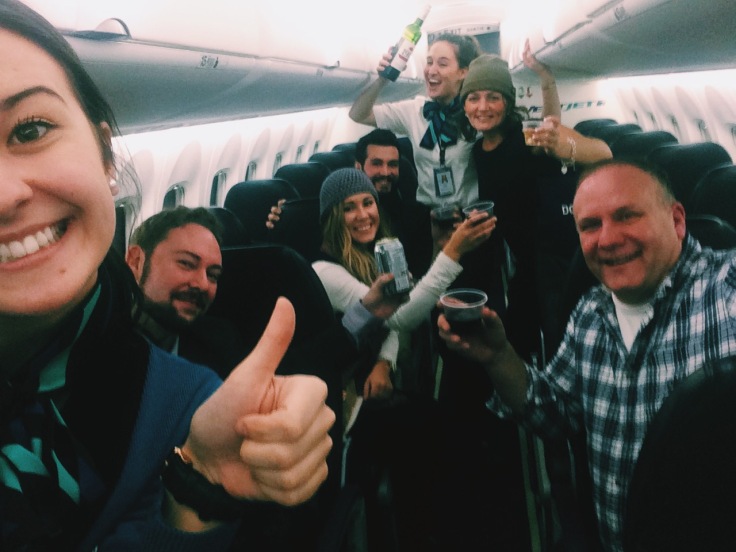 4. A boy sang to our guests after our flight

This little gentleman wanted to sing us a song, so we told him that at the end of the flight he could come up to the front and use our microphone to sing to everyone. When the seatbelt sign went off he scurried up to the front, grabbed the PA, and then got a little stage fright. I told him to face me, close his eyes and pretend he’s just singing to me. Within seconds he started: “I love you, I love you, de da doo, I love you.” IT WAS SO ADORABLE!!! Everyone cheered as he ran past them back to his mom. It was the best send off we have every had.

5. Flashed airplane lights to my boyfriend on a thunder bay turn

Working as a flight attendant and commuting to Toronto means I don’t get to see my boyfriend as often anymore. This month I didn’t have any layovers in Thunder Bay so it was even more than usual. Because we missed each other, he decided to drive tot the airport to watch me land and takeoff again. Because I had an amazing crew, the pilots were able to flash him their lights quickly while we were taxiing to say hi!

I used my travel benefits for the first time and headed to the big apple with my sisters and mom! It was a quick 3 days and we had a ton of fun!

A missed approach is when for whatever reason you can’t land on the runway. Sometimes its due to really bad turbulence or visibility or because there is something on the runway. The plane is very close to the ground, ready to land when the engines start working overtime and you very quickly ascend back to a safer altitude. I’ve only experienced one in a Q400 during training, but as we were landing into NyC I got to experience on in the jet!!! It was such a cool feeling, but also very comforting knowing what was going on. For us, the reason we had it was because there was another plane still on the runway.

George street is a famous street in St. Johns known for its liveliness in the wee hours of the night. I had a layover in St.Johns on the weekend so my crew and I headed to its chaotic streets and witnessed its sloppiness. We had a blast listening to live local music and feeling like complete tourists in this very unique place.

9. Axe throwing with my crew

On that same layover in St. Johns my crew decided to go throw some axes around, definitely not something you do on the regular. We had a blast though, and it turns out I’m not as bad as I thought I would be throwing axes around.