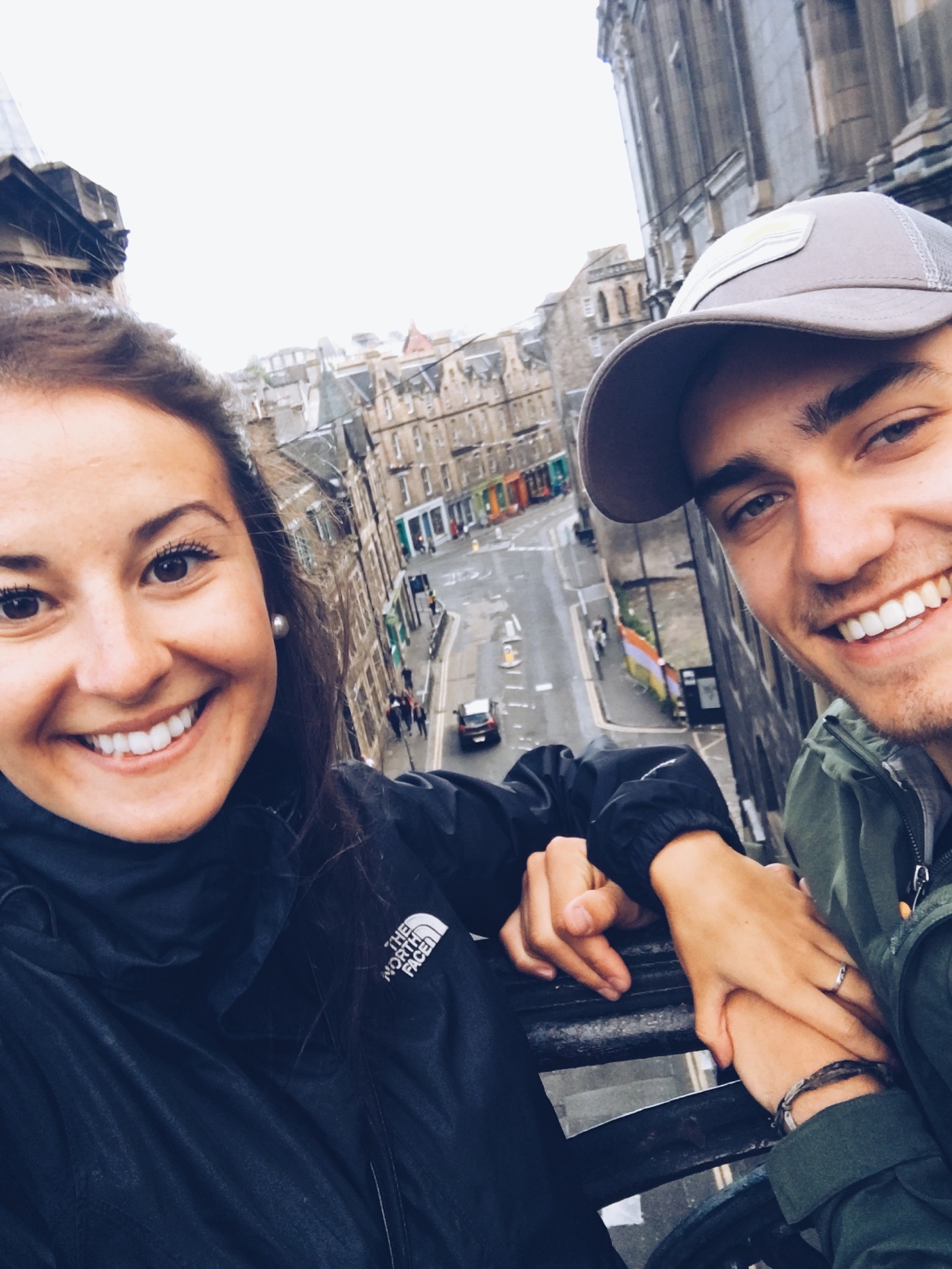 I know who goes to Europe for the weekend, right? Well, apparently I do. Despite how confused my sleep schedule gets.. especially heading right back to work afterwards.. it’s always worth it. This weekend I headed off to Scotland to see Glasgow and Edinburgh with my boyfriend, Anthony. I left Wednesday afternoon with a quick layover in Halifax and then took the overnight flight to Glasgow.

From there I hopped on a bus to downtown (8£), and then took a train to Edinburgh (about 12£ I believe). My hostel (Kick Ass Hostels) was close enough to the train station in Edinburgh that I was able to just walk!

I had to wait until 1 pm to check in (and literally not one minute earlier – I tried), so despite being incredibly exhausted I left my bags at the hostel and took off to explore Edinburgh for the next 3 hours.

Even if I don’t have time to trip plan, I never fail to look up delicious gluten free restaurants and coffee shops to try. My first stop was Pumpkin Brown a vegan and gluten free coffee shop in the grassmarket neighbourhood. With my coffee and half awake spirit, I wandered through the castle grounds to Princess Street, where I found the nearest Primark and Urban Outfitters. I got a cute crop top (3£), and white sneaks (also 3£).

I was in DESPERATE need for a nap, counting down the seconds till it was 1 pm and I could crash for a few hours before Anthony showed up. The hostel itself was really nice and I highly recommend. The beds were comfy, it was clean, it had a coffee shop & bar, and the people there were friendly. I slept for a solid 2.5 hours before waking up in a panic as I realized there was a good chance Anthony was going to get lost trying to make it to the hostel on his own.. I was right :-). I set out on foot (after having another coffee) trying to find him hoping I would notice where he could have gone wrong. About an hour after wandering around aimlessly he made his way to the hostel.

We didn’t want to waste the night so we set off for dinner down the road to Mamma’s Pizza. This restaurant is also in the grassmarket area, and has delicious gluten free pizzzzaaa!!!! NOM.

After getting seriously buzzed on some cider (thanks to little sleep & probably a lot of dehydration), we spent the next hour giggling around Edinburgh. We walked around Greyfriar – the graveyard where J.K.Rowling was inspired by some of the names.

We also stopped by the coffee shop where she wrote many of the novels! We lucked out too because it was nice and quiet and a sweet man asked if we wanted our picture taken. His wife apparently wanted to be in the picture too ahaha. 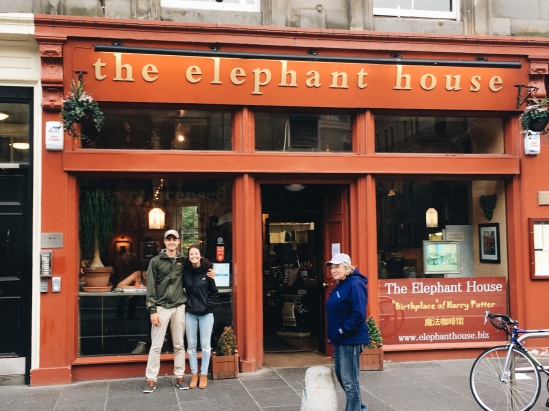 We headed back to our hostel and grabbed another drink at the hostel bar before I had to take Anthony to bed – he was unbelievably exhausted (which may explain what happened a few hours later). Our hostel room was packed and we had all been sleeping for a few hours when a loud noise woke us up at 1 am. Anthony was frantically yelling “Sunday” repeatedly in his sleep. I was crying of laughter as he shouted Sunday for the 8th time, waking everyone in the hostel room up except for himself. Unfortunately for me though I was wide awake after this for a solid 3 hours and didn’t go back to sleep till 4 am. 😦

Despite being tired from Anthony’s ridiculous sleep talking, I didn’t want to waste the day so we got some coffees and headed towards Arthur’s Seat.

We had a ton of fun hiking and enjoying the view. 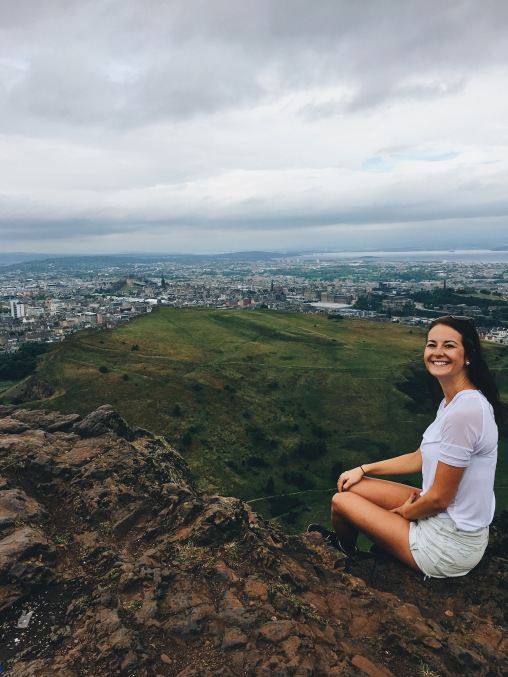 After Arthur’s Seat we wanted to do Calton Hill but absolutely needed food first so we walked along the Royal mile to La Locanda – an Italian style restaurant with gluten free pasta! This place was sooo delicious and what we needed as it started to get a little cooler. After lunch we made our way to Calton Hill.

I was in major need of a nap after my 48 hours of very little sleep so we walked back to the hostel and I crashed for 2 hours, while Anthony walked around and explored a museum (apparently, a let down).

After dinner we met up with some friends we had made in the hostel and decided to do the Edinburgh pub crawl. Along the way we met lots more people and had an amazingly fun night. 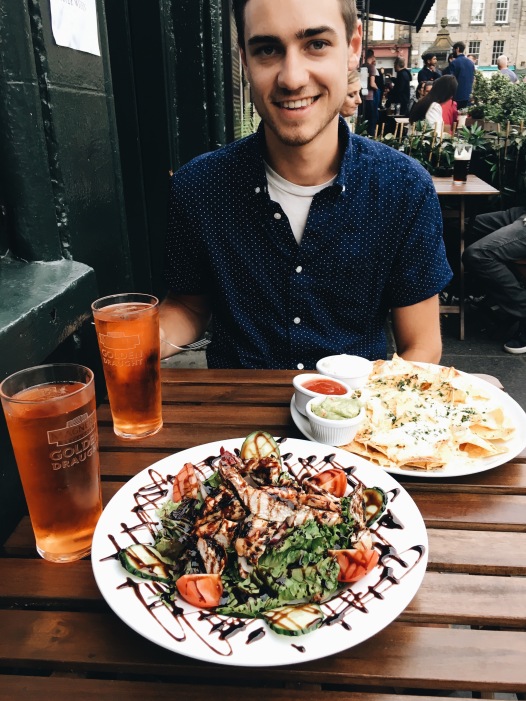 The only not fun part was the next morning.. I was tired more than anything and it was raining out and we had to check out of our hostel so all in all not a great start to the day. We wandered around in the rain for the first little bit and then headed to the Edinburgh castle.

We spent about 1.5 hours wandering there freezing in the rain in the crowds of people before we gave up and decided to just take an uber (they have uber in Scotland!!) to the train station and go to Glasgow. We dropped our bags off at our hostel in Glasgow and went downtown to see a bit of the city. 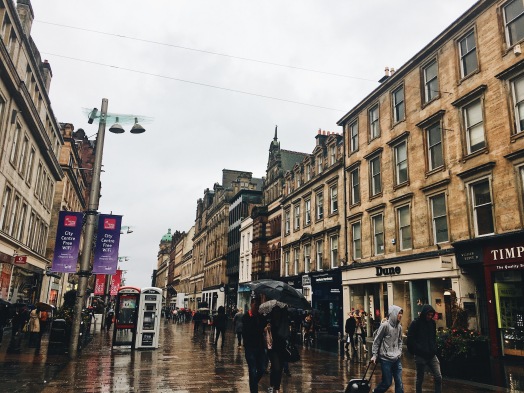 We had heard disappointed reviews of Glasgow so our hopes were not very high but we were very happily surprised. It was raining and miserable just like it was in Edinburgh but we fully enjoyed our 12 hours in Glasgow despite it. We went to a few shops, and a grocery store (my fave part of travelling in Europe honestly). We then walked along the water back to the hostel.

We finally had an amazing nights sleep before heading to the airport and back to the real world. Couldn’t have asked for a better person to spend 72 hours in Scotland with!

One thought on “72 Hours in Scotland”